If you are new to this website, this is a good place to start.

The basic principle of Worldwide Combos is that you need to fill the lines of the grid with blocks. Once a line is filled, is disappears, preventing you from topping out.

When you play, you use one block at a time. You can do the following moves with it.

There is a key for every action that is defined above. These key binds can be viewed and edited in the Settings. 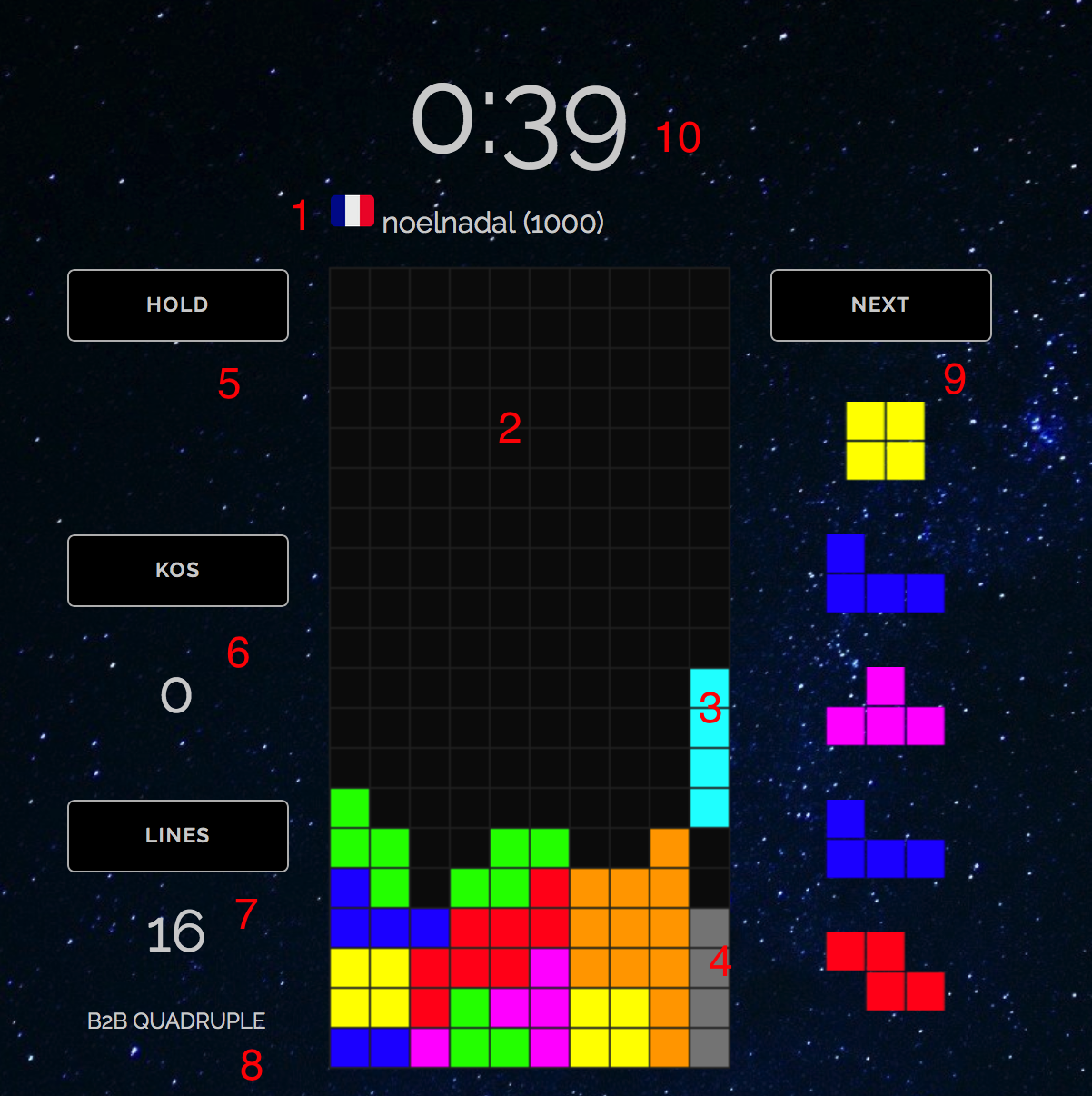 When you try to move left, right or down, and hold the key, your block first moves by one line or one column, then after some amount of time the block starts moving at a higher rate. Theses rate are defined by the Delay and Repeat values. As for the key binds, you may customise them in the Settings. Values have to be filled in milliseconds.

Note that, putting lower delay and repeat rates may help you play faster, but putting too low values may result in losing control and misdropping your blocks (this is usually annoying).

The "Gravity" tuning lets you decide at which speed blocks fall. This value has to be at most 1000 milliseconds.

When playing multiplayer modes, there is an option called "Tuning limit". It means that players' speed tunings are increased, if necessary, to 150/25, 25/25. This does not change players speed tunings, as the change is made for a particular round only.

In games modes else than Survivor and Elite Survivor, incoming lines are visible on the bar which is located on the grid's right. Handicap lines only appear after the next block has been placed. If the incoming lines appeared less than 500ms ago, or if you clear lines while you had incoming lines and the handicap blocking option is enabled, the handicap lines do not appear, and according to the number of lines you should have sent to the opponent, part of them are removed. The remaining ones might still appear after you place the next block, if you don't clear any line at that time. All official rulesets that are not Deadline rulesets have handicap blocking enabled, yet it can be disabled in Custom Games.

When you top out for any reason, the handicap lines on your side are partly or entirely removed, depending on your stack's height and the handicap type.

Solid handicap basically consist of filled lines. Since it is not possible to clear them in the normal way, in order to get rid of them one has to clear lines on their side. Then, while that player was handicap lines at the bottom of the grid, lines that should be sent to the opponent are not sent and are replaced by handicap line removals.

Handicap with holes are lines with 9 slots out of 10 that are occupied. Such lines are cleared in the same was as usual lines are. The hole's positions are determined randomly. However, when several lines are sent by placing one block, all these lines have their hole at the same position.

Handicap with bombs are filled lines, but one of the 10 slots contains a bomb. Such lines are cleared by placing a block right above the bomb's position. The bombs's positions are determined randomly. However, two consecutive bombs cannot be in the same column.

The number of lines that are sent may be computed as follows. Note that scores below are cumulative.

When sending handicap lines, the way holes or bombs are inserted in the handicap depends on what kinds of attacks are being made. Generally speaking, lines are split between a "main attack" and a "side attack", and both attack are treated separately:

Please note, that clearing a single line does not send lines to the opponent. All the lines sent belong to the main attack. In deadline rules none of these send additional lines.

A k-combo is made in one of the following ways:

In all these rules, the exact amount of lines sent depends on both the combo count and the number of handicap lines that you cleared.

Let's assume a player just did a k-combo after clearing h handicap lines, then the number of lines sent is Math.min(Math.max(1, h), l(k)) where l(k) is the maximum number of lines you can send with a k-combo. This maximum is described in the table below.

A Back-to-back is made, when two consecutive line clears are made in one of the following ways:

Please note, that it is not necessary to make those two line clears with two consecutive blocks. The Back-to-back bonus is always 1 line in the Basic rulesets. In the Chaos rulesets, the bonus is 2 if the two last spins were made with two blocks of different shapes, 1 otherwise. These lines belong to the side attack if made with a spin, to the main attack otherwise. There are no back-to-backs in Deadline rulesets.

A perfect clear is made when the player's field is empty. Performing a perfect clear sends 7 lines regardless of the ruleset, 4 to the main attack and 3 to the side one.

The anti-stalling system is made to avoid people not play in order to not being KO'ed. The current block is locked after 10 seconds.